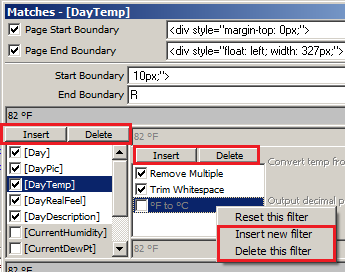 - removed support for configs that were saved prior to v2.60 (April 2008). any old configs that use %Match instead of [Match] will need to resaved before using future builds of the plugin.
- fixed the ReadTempFile function, which got broke quite awhile ago
- the Blank Match Occurrence Text in GetScrapedMatches now functions as an Invalid occurrence substitution. So instead of replacing blank occurrence tags, it now replaces *missing* occurrence tags. Existing configs that use this option will need to be manually updated
- added alternative output text to GetScrapedMatches for when the Output Template doesn't contain a valid tag. this is useful for displaying "loading..." text during config startup.
- the Remove Extra Spaces filter now uses a different technique to be faster
- added Remove Extra Chars filter, which is similar to the Remove Extra Spaces filter, except you can now specify a character other than space.